New SEC crowdfunding rules go live today. Some questioned whether the Biden Administration would try to kill the rules approved last November. But that did not happen, and now entrepreneurs and private investors can engage more freely, although further improvements await.

Regulation Crowdfunding changes before and after 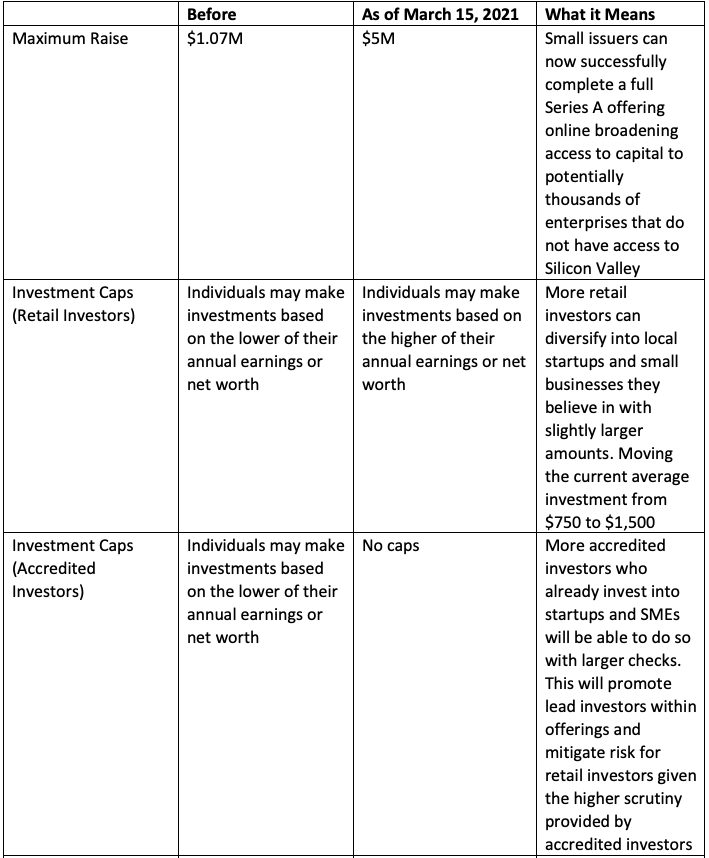 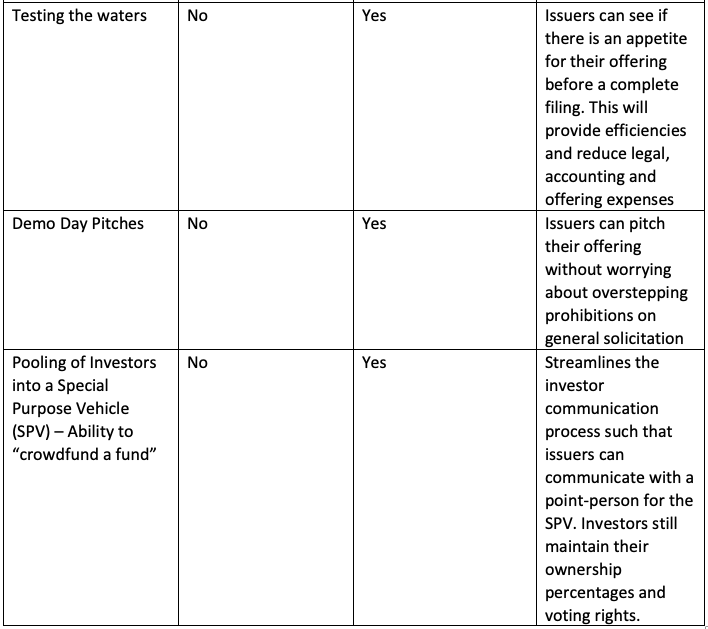 Although new SEC crowdfunding rules vastly improve the status quo, questions remain. Foremost are how special purpose vehicle (SPV) rules will work. In theory, SPVs should ease messy cap table issues and other hurdles linked to unaccredited investors. But the Commission’s rule-heavy approach may kill this innovation before it blooms. At the least, the Commission’s crowdfunding-vehicle exception will force issuers into a cost-benefit analysis.

While supporting the crowdfunding-vehicle concept, critics panned the costs and complexity. Wefunder, the largest portal by volume, will not support it. As envisioned, one raise may require multiple crowdfunding vehicles. The SPV also saddles issuers with cost burdens, substantially increasing upfront outlays for an already expensive option. Even with proxies, the need to gain permission from security holders for transactions will burden administrators. There are also additional disclosure obligations and questions about who will manage the vehicle and distribute paperwork.  These issues will hamper and may foreclose crowdfunding-vehicle use altogether.

The marketplace may have solved this ‘messy-cap dilemma’ on its own. Wefunder created a ‘custodian’ model that reduces Reg CF investors to one line. Other portals followed. The SEC has not publicly commented on the new structure, which may signal tacit approval.

As I have written in ‘Fixing the JOBS Act and Inviting the Tokenized Future, the Need for Congressional Action,’ many more fixes remain. These include:

Unfortunately, further improvements to the SEC’s crowdfunding rules are unlikely. The election brought a leadership change at the Commission. Gary Gensler will assume the chair once confirmed. Senators did not query Mr. Gensler about the new crowdfunding rules or the JOBS Act in general. But both Democrat-appointed Commissioners voted no. Acting Chair Allison Herren Lee and Commissioner Caroline Crenshaw released statements claiming the new rules lacked investor protection and were unnecessary. For what its worth, Mr. Gensler forcefully stated his investor-protection priorities during his confirmation hearings and his MIT tenure. This likely foretells his posture toward private-capital expansion.

Finally, the Commission has already declared priority shifts. On March 4 it announced an Enforcement Task Force Focused on Climate and ESG Issues. This followed a March 3 release of 2021 Examination Priorities, a February 5 announcement of a new Acting Deputy Director of Division of Enforcement, and a February 1 new Senior Policy Advisor for Climate and ESG.

Commissioners Hester Peirce and Elad Roisman have objected. The Republican-appointed duo questioned what the flurry of climate-and-ESG-focused moves may mean. They averred new standards in this highly charged space may only arise via Commission vote. Regardless, the PR blast assuredly ends momentum for further private-capital changes.

The new SEC crowdfunding rules will open opportunities for investors and startups alike. The rules will help the already booming alternative-capital industry grow. While further boosts are now unlikely, the industry can blossom before future revisits.