Coinbase CEO Brian Armstrong recently announced the crypto exchange will run an apolitical shop. The decree seeks to avoid drama-filled, virtue-signaling walkouts that have plagued other tech-focused companies. The move defies not only Coinbase’s Silicon Valley pedigree, but the corporate-culture zeitgeist. Armstrong offered objectors generous severance packages to go, about 60 employees or 5% went.

Normally Coinbase’s stance would evoke shrugs. Indeed, businesses usually avoid emotionally charged work-unrelated topics on company time. And those who complain of political bias in corporate messaging or policies are often met with the snide retort, ‘Go start your own [insert industry] company.’

But these aren’t normal times. Activist bullies dictate terms. They target dissenters socially, economically, and politically. Most cave, genuflecting to grievance is easy, taking unpopular stands is hard. But Armstrong took one; he should be applauded.

Costello, whose net worth is reportedly $300 million, would presumably opine from a fortified abode manned with armed private security. Wouldn’t want those revolutionaries getting any ideas about his allegiance to ‘we-first’ capitalism.

The violent imagery evinces Big Tech’s breezy authoritarianism, which has seeped into crypto. Not only do adherents constrict the Overton Window, often without explanation. But they deem any disparity proof of discriminatory intent, no matter how ‘woke’ the industry or company.

It’s not clear how Twitter’s corporate mission keeps people from “falling behind.” It’s clearer how it controls the national conversation and censors what an Oceania bureaucrat might call ‘wrongspeak.’

The latest tool is a pop up for tweets Twitter has deemed provides insufficient context. The company will now “suggest” reading the full context before retweeting. One can imagine whose messages will get such treatment—Big Brother on the Information Superhighway. 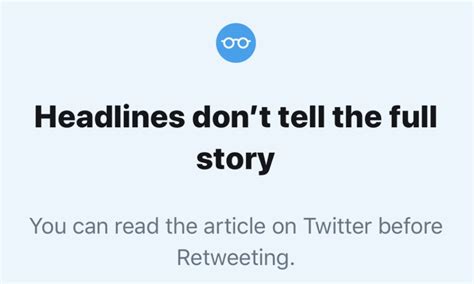 All of this of course tracks with a larger push for cultural hegemony: science, sports, journalism, academia have all been infected. Free thinking, say the cultural oligarchs, won’t be tolerated. And silence, if activists get their way, won’t either. Pushback happens, just ask the NBA. But it’s slow and churning. Those demanding submission usually have little to lose. Colin Kaepernick’s career was over. Lebron James’s is in twilight.

As I have previously written, the shame is that blockchain can solve this, because code is apolitical. A dApp doesn’t care if you support Trump or Biden. Blockchain can rid us from cultural gatekeepers and data chokepoints. Open platforms where users control the rules and people take their followers with them when they go potentially ends cultural conformity and groupthink. It represents the only real way to not leave anyone behind. Coinbase is the first, if Armstrong succeeds he won’t be the last.