Crowdfund Capital Advisors has always led the equity crowdfunding (Reg CF) charge. It provides the public free and invaluable data about Reg CF’s promise and growth. It deserves accolades for its leadership.

But last week it released a report and with The Small Business & Entrepreneurship Council that tries to steer Reg CF down a wanton path. The groups argue the federal government, i.e. taxpayers, should co-invest alongside private investors in Reg CF issues. The scheme would involve a $20 billion fund dispersed in tranches of up to $250k. Terms would be “standard,” and issuers would repay the loans, first to private investors, then the government.

As evidence for this program’s need Crowdfund Capital Advisors and SBE Council promote a few factors. First, they expose challenges traditionally underserved entrepreneurs such as minority groups face. (They drive home the point home by analyzing Reg CF issuers by Congressional district). Second, they point to a UK program that could serve as a model. Finally, they declare the pandemic’s hardship makes this program necessary and urgent.

Several problems arise with programs of this sort from an economic and social utility standpoint. First, it would apparently require participating companies take on multi-source debt. While debt is the right financial route for some Reg CF issuers, they are not the majority. As the 2019 Reg CF report noted, only 27% of issuers chose debt for their financial instrument.

This limits company freedom to choose their own financial instruments and forces it into an ill-suited instrument to enjoy taxpayer largess. The report nudges local investors to the front of the line, if issuer fails, as many of them will, taxpayers get stuck with empty IOUs.

If the issuers need the extra money after a successful Reg CF raise they can use their new capital as collateral. If the market won’t support an extra injection, taxpayers shouldn’t be a backstop.

Second this program would prolong the agony of “zombie firms.” Taxpayers will prolong the agony of firms destined to die. In free markets not every idea succeeds, and many entrepreneurs fail once or twice before hitting their stride. The experience of learning what went wrong is invaluable. And doing more with less on short budgets makes a firm scrappy and smart in a way that getting a six-figure wire from Uncle Sam never will. Capitalism cannot succeed if it cannot destroy bad ideas. This axiom is why SEC Chair Jay Clayton calls the US private capital markets “unrivaled and coveted around the globe.”

Third most big portals are already committed to serving underserved communities and nontraditional entrepreneurs. Some write it into their mission. Wefunder’s charter for instance states “Wefunder will help those who are willing to work hard to achieve the American Dream. Everyone deserves access to funding, including immigrants, minorities, and the poor.” Republic adds “Traditionally, female, black, and latinx founders have seen far less venture capital than their white male counterparts. Furthermore, the majority of funded startups come from Silicon Valley and New York with little representation from other cities across the US.”

Reg CF is already a great tool bring capital access to these entrepreneurs. This success will hopefully spark an entrepreneurial cascade of strong companies emerging from these communities and demographics. But the market will (and should) be the ultimate judge of their success. 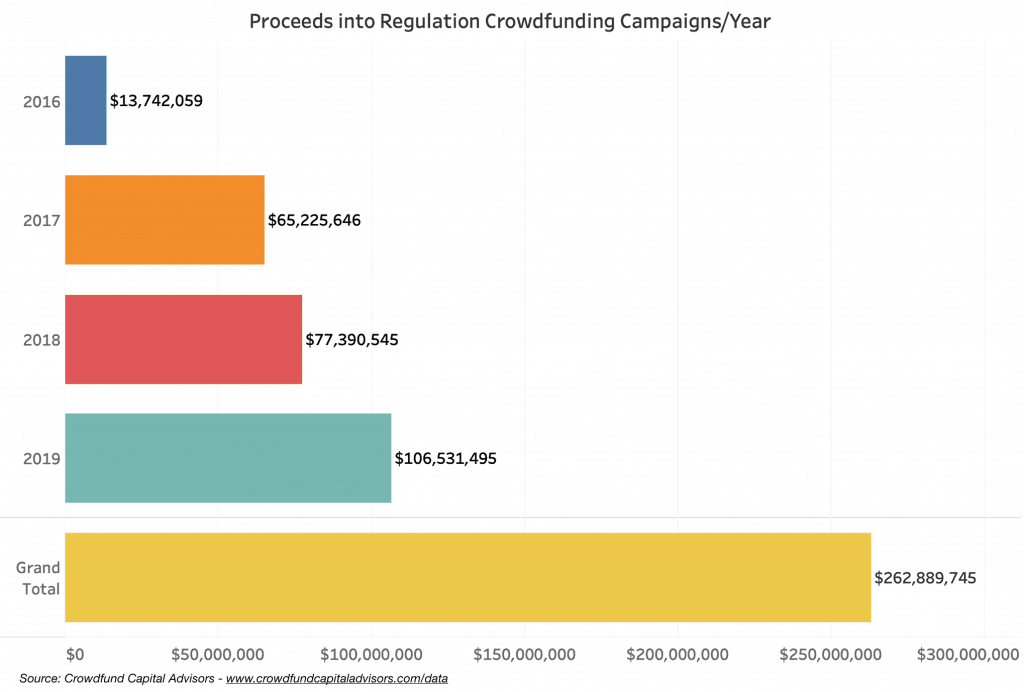 The SEC should step back and let Reg CF flourish

More government involvement is not what Reg CF needs. The SEC has finally become comfortable enough after four years to propose increasing the offer limit from $1.07 to $5M, allow ‘testing the waters,’ and remove accredited-investor caps. This is the right direction, but the regulators should remove more restraints to equity crowdfunding. As I argue in an upcoming law review article, Fixing the JOBS Act and Inviting our Tokenized World, the Need for Congressional Action, Congress should copy the private-ordered New Zealand model researched by Professor Andrew Schwartz.

Schwartz showed in an SEC Comment letter how New Zealand copied our own Reg CF but removed many of the restraints currently facing US entrepreneurs. Through gatekeepers and syndication, New Zealand keeps costs low whilst protecting against fraud. Larger lead investors and portals perform due diligence. Big investors put their money on the line and retail investors then join. Reputational awareness keeps portals from accepting subpar issuers. Entrepreneurs face no advertising restrictions or lengthy disclosure documents and investors face no limits.

This model has worked well providing exponentially more opportunities for investors when scaled for economy.

Crowdfund Capital Advisors is a great resource with a bad idea

Crowdfund Capital Advisors is an invaluable resource for equity crowdfunding. And their intentions are certainly noble. But their bias toward more government involvement is not the way. The government already interferes in the economy in enough terrible ways. It should not straddle the nation’s entrepreneurs with its overbearing presence.