Is Congress about to Deregulate Equity Crowdfunding? 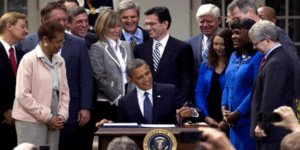 Few issues in Washington get prodigious bipartisan support, but the 2012 JOBS Act’s equity crowdfunding title was one. After a long delay, Reg CF finally went live in last May. Now Congress should deregulate it.

But a year on some are asking, ‘Where is the Crowd?’ The crowdfunding total is approaching $40 million but it should be billions. A recalcitrant SEC and onerous regulations are two possible answers to why equity crowdfunding has steady but unspectacular growth in year one.

The chances Congress will completely deregulate are slim. First, the bill has yet to face the Senate where some or all of it could be tossed in reconciliation. Second, the SEC must implement what survives. Some have accused the agency as being openly hostile to the very idea of crowdfunding. As Edward Knight, Executive Vice President and General Counsel of NASDAQ, stated in a March JOBS Act hearing for the House Committee on Financial Services:

From the outset the SEC’s view of [equity crowdfunding] was they were not for this they and made it shall I say needlessly complicated and did not approach it except as this this was something where the public is going to get harmed and we need to narrow it as much as possible.

At the very least, the SEC doesn’t seem to react well to change. Acting SEC Chairman Michael Piwowar described the changes the JOBS Act makes to the SEC’s mission this way:

The JOBS Act requires the Commission to think of capital formation and investor protection in fundamentally different ways than we have in the past. The crowdfunding provision of the JOBS Act forces us to think outside of our historical securities regulation box and to create a different paradigm than the one we have used for the past eight decades.

Congress will deregulate but it will take more pressure

Whether through the CHOICE Act or a standalone bill, equity crowdfunding needs changes to reach its potential to provide much needed capital to America’s entrepreneurs and small businesses. The sooner Congress enacts these reforms the faster America’s economic engine can start humming again.